One of the ways to purifying gold is to take the crude gold ingots and electrolyse them.  The crude ingots are used as gold anodes and electolysed in a hot acidic solution which consists of a mixture of 8 % gold chloride and 10% hydrochloric acid. As the gold ions migrate through the solution they are deposited on to foil cathodes so purifying the gold, the gold produced in this method is about 98.5% pure.

One of the older methods of purifying gold would not be permitted today since it involved toxic heavy metals. This traditional example invloves taking gold ore and crushing it down to a powder. it was then amalgamated in a mixture of salt, copper powder which had been roasted and liquid mercury a particularly toxic combination! This mixture was then spread on the ground and donkeys were lead round and round in a circle trampling the mixture to crush it into even smaller granules. Over time the mixture dissolves in the liquid mercury and this mixture is then distilled and placed in a cupola, which is a type of furnace. in this way the gold that emerge from the furnace was pure. This method of purifying gold, as previously mentioned is no longer practiced. 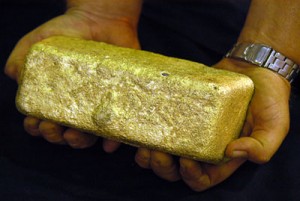 In the final stage of gold purifying gold or gold refining any of the impurities from the smelting process are removed. Dore bars have variable weights and can be up to 25 kg they have to be sent to gold refineries to raise the purity to more than 99.5%

Some Dore bars that are mined in Brazil in small or independent groups these bars can weigh from 18 g upwards and the quality varies enormously, these are called Garimpo bars.

Dore bars are purified by melting them in a furnace and adding borax and soda ash to the molten metal. This separates the gold from other precious, and the less important base metals. The gold from this process is 99.9% pure. It is then cast into one of the more standard forms of gold ingots of which there are close to 55 categories.