You are here: Home / Gold Blog News / Falling Gold Price – is it real?

The falling gold price at the end of August has resulted in the index hovering in and around 1300 and looking at a trend down.

Given our article on when to sell gold it follows that with unrest in the world in Russia/Ukraine, Syria, Iraq and Israel it might seem that the gold price should be rising rather than a falling gold price, with the world hedging its bets and moving towards the traditional security blanket.

This falling gold price should perhaps be moving in the other direction towards 1300 and up towards 1500. The gold index is evidently struggling a little.

Reasons for a falling gold price 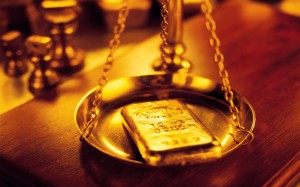 There are perhaps 2 reasons for this, the first is that the major institutions have already made their money from gold and got out of the market. The number of hedge funds operating is half what it used to be with the falling gold price a reality and not a blip.

Most retail and small time investors have cashed in their lots and moved on, this has little effect on the market anyway but it is the area that gets the most publicity in the press.

The second factor has more of an element of conspiracy and intrigue about it. The fact is it may well be that the world does not want its wealth to be held in a reservoir called gold.

The UK’s gold reserves were famously sold off the country’s gold reserves at a low, or relatively low price. The reserves of gold in the USA at Fort Knox are reported to be either very low or non-existent.

Now consider the fact that he countries that are holding large amounts of gold are India, China and Iraq. With the present situation these countries are not the ones that the ’West’ want to be holding such significant wealth. One way of eroding that wealth is to have a falling gold price so the value of their asset falls.

Time will tell but it is expected that the gold price will continue to fall downwards towards 1000.